A world-class panel of judges are gearing up to swirl and sip hundreds of ciders in Australia’s largest cider show.

This year’s guest international judge Eduardo Coto from Spain brings to the table an extensive knowledge of European ciders and international trends.

Cider Australia President Sam Reid said the pre-judging warm up will include a Spanish Cider Master Class hosted by Mr Coto on Monday 25 September in Melbourne.

“Award winners will be announced at the cider industry’s annual gala dinner on Friday 27th October at The Craft & Co in Collingwood”.

“The festivities will continue on Saturday 28th October at an Industry Forum hosted by Cider Australia, which will be a full day of industry development activities aimed at continuing to step-change the quality of ciders we have in Australia”.

“The Forum will conclude with the inaugural Australian Cider Awards Exhibitor Tasting where entrants to the Awards will be able to obtain valuable feedback from the judges on their entries and taste them alongside other entries”, said Mr Reid.

You can enter the Awards online via www.cideraustralia.org.au/awards

Tickets to the Spanish Cider Master Class hosted by Eduardo Coto are $40 ($20 Members) and will be available via Eventbrite on 1 September, along with tickets to the Industry Forum. Further details on the Awards Dinner are attached. 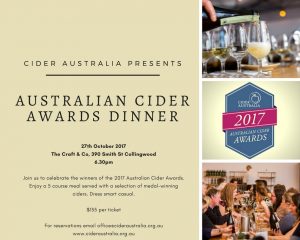