President of Cider Australia Sam Reid said Mr Henry was a respected leader in the cider industry and one of the pioneers of cider apples.

“The industry is in shock at the passing of Drew following an accident at his orchard.”

“He contributed so much to the cider industry and this is a devastating loss to his family, the tight-knit community of Harcourt and all those who were lucky enough to know him.”

“The cider category in Australia would not be what it is today without his vision and foresight and he will always be remembered for his strong opinions and generosity in sharing his knowledge”, Mr Reid said.

Drew will be missed by many in the cider community from Australia and overseas. 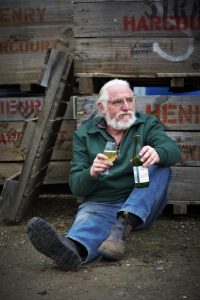 Drew Henry was one of the leading pioneers of the modern Australian cider industry. With his wife Irene and son Michael, Drew started making traditional real ciders at the family’s orchard and cidery in Harcourt, central Victoria, in the late 1990s, years before the current cider boom took off, long before the market was ready for them. He sought out more than 40 English and French varieties of cider apples and perry pears in heritage collections around the country and planted and grafted them in his own orchard. He was a passionate advocate for cider tradition and culture – and an outspoken critic of bland, industrial ‘alcopop cider’ – encouraging many people to plant, make and drink real cider and perry made from real apples and pears, generously supporting them and advising them along the way.

I discovered Drew Henry’s generosity at our first meeting.

Bowling up to Henry of Harcourt’s Cellar Door some years ago looking for scion wood of the varieties so painstakingly collected by Drew I could reasonably have been met with rejection. But the opposite was the case.

The Henrys, Drew, Irene and Michael have since helped us and others with supplies of budwood from tried and true trees that continues to help amateur and aspiring commercial cider makers gain access to that indispensable ingredient of good cider – the right apples.

Drew realised that knowledge was for sharing, not hiding, and if decent cider was to be more widely available there had to be decent cider makers with access to proper apples. In recent years he worked with us to present cider-making workshops.

With his charmingly gruff style he freely shared his knowledge. Starting with the basics: good hygiene, fresh juice from the right apples, decent yeast and not too many other things, Drew took participants right through the stages of his craft answering questions expansively.

His presentation on cider flavours and taste based on a skilful and entertaining walk through Henry of Harcourt’s varietals and blends was always a lights-on moment.

Just recently while reviewing our last workshop Drew was excited about some ideas he had to make the next one better. The aim as always was to enable more people to make good, honest cider so more people could get to drink it.

Drew’s “Henry of Harcourt” was an entrant in the first Australian cider competition in 2007 held at Lenswood. Against Australian and international entrants Drew received the Best in Show award for his Perry and topped the Dry Cider class and the Dessert Cider class. As usual, ahead of his time, he went on to develop various varietal ciders based on the English cider apples in his collection.

A lot of cider fans and potential producers will remember Drew for his tasting presentations at field days and conferences. He was an expert in the area of tasting and the differences that could be achieved with skilful apple blending and cider making.

Drew was also a foundation member of the producer organisation Cider Australia. He always fought for “real” cider to be made from “real apples” i.e. cider apples. Perhaps not surprisingly, the Henry of Harcourt motto is “cider for grown-ups”.